The Merriam-Webster dictionary defines a percentage as "a part of a whole expressed in hundredths."

A Real Example of a Percentage

A percentage is written as a number followed by the percentage symbol %: 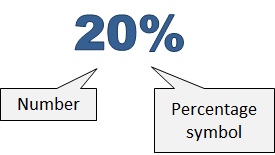 A Real Example of What a Percentage Means

Imagine you were given 20% in a mathematics exam. You would have got 20 out of every 100 marks. 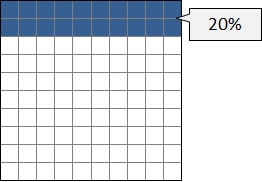 Use this interactive widget to watch the shapes fill by the percentage specified and the sums complete automatically.
Enter a Percentage

The slider below shows some more examples of visualizing percentages using a grid of 100 squares. Open the slider in a new tab

Other Types of Fractional Numbers

Percentages express a part of a whole. There are other ways of expressing parts of a whole: For example:
Help Us To Improve Mathematics Monster
Please tell us using this form