Equivalent fractions are fractions that show the same part of the whole, even though they look different.

The following fractions are all equivalent to 1/2 (one half): 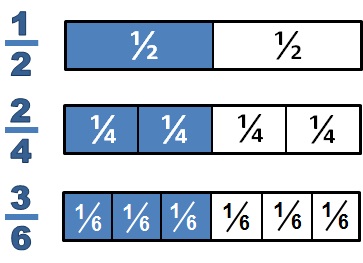 How to Find Equivalent Fractions

You can make equivalent fractions by multiplying or dividing the numerator and denominator by the same number. 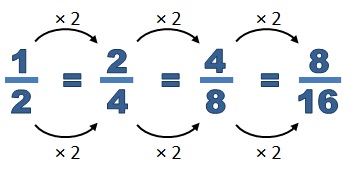 The bottom number of our fraction (called the denominator) is 4. It tells us to divide the cake into 4 equal parts. In our example above, equivalent fractions of ½ are found by multiplying both the numerator and denominator by 2.

This is called cancelling. It simplifies (or reduces) fractions. 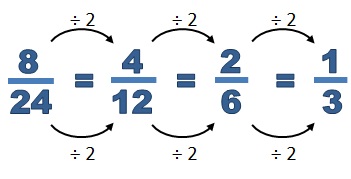 In our example above, equivalent fractions are found by dividing both the numerator and denominator by 2. Read more about simplifying fractions 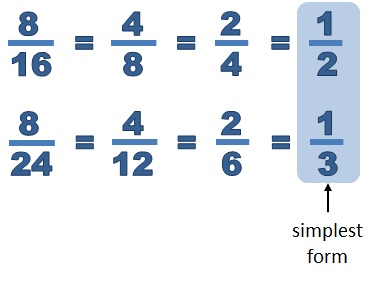 The slider below tells you more abour equivalent fractions and simplest form. Open the slider in a new tab

What Is a Fraction?

A fraction is a part of a whole number. Fractions consist of a numerator and a denominator. There are three different types of fractions: 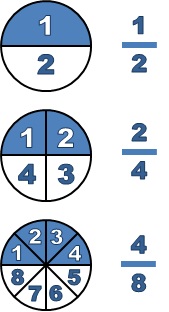 The top cake shows the simplest fraction, as there are the fewest slices.

What Is a Multiple?

A multiple is the result of multiplying a number by an integer. For example, the multiples of 3 are:

What Is a Factor?

A factor is a number or symbol which divides exactly into another number. For example, the factors of 10 are:

What Is the Greatest Common Factor?

The greatest common factor is the largest factor that is common to two or more numbers.
Help Us To Improve Mathematics Monster
Please tell us using this form