An equation tells us that two things are equal. Equality is denoted by the equals sign (=).

The Oxford English Dictionary defines an equation as "a formula affirming the equivalence of two quantitative expressions, which are for this purpose connected by the sign."

We can include operations in equations. We can rewrite 2 = 2 as:

We can use equations in algebra. An equation in algebra uses letters to represent numbers. These are called algebraic equations Let's use the letter x to stand in for a number:

The Parts of an Equation

An equation is shown below. It is an equation because it has an equals sign. 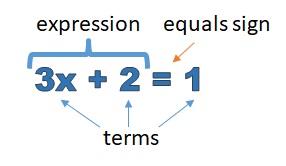 Each number or letter (or both written next to each other) is a term. When the terms are added or subtracted, they form an expression.

It appears in his book 'The Whetstone of Witte':

It is equivalent to '14x + 15 = 71' in today's notation. He chose two parallel lines of equal length, "bicause noe 2 thynges can be moare equalle."

Here is an interactive game to help you learn about equations.


(The harder the level, the more points you score per correct answer.)

Tip: If the game is playing slowly, you can use the controls below to remove the background text and image to speed up the game.