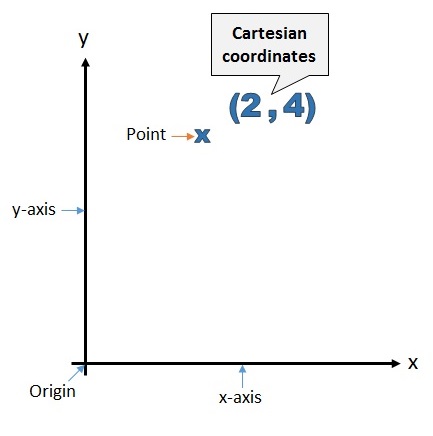 Use this interactive widget to generate Cartesian and polar co-ordinates. Simply click in the shaded area.

How Do Cartesian Coordinates Work?

Cartesian coordinates work by measuring how far the point is from the origin.

In general, we write Cartesian coordinates as:

x is the x-coordinate. y is the y-coordinate. x and y can taken any number (whole or fraction, positive or negative).

Cartesian coordinates are named after the French philospher, mathematician and writer, René Descartes.

Descartes is famous for the phrase "Cogito ergo sum" - 'I think therefore I am'. In mathematics, Descartes laid down many of the conventions on notation we use today. In algebra, he was the first to call unknowns x, y and z, and knowns a, b and c. If you still get confused having letters stand in for numbers, blame Descartes!

x-coordinates and y-coordinates can be positive and negative. This means there are four quadrants made by the two axes.

Don't Mix Up The Coordinates

An easy mistake to make is to mix up the x and y coordinates. 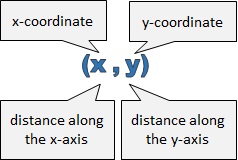