Addition is the bringing together of two or more numbers (or objects) to make a total or sum. For example, 2 apples plus 3 apples makes 5 apples:

How to Add Short Numbers Together

It is easy to add short numbers. Children learn to count fingers or objects for small sums. A number line can be used to add. For example, 2 + 3 can be performed on a number line: 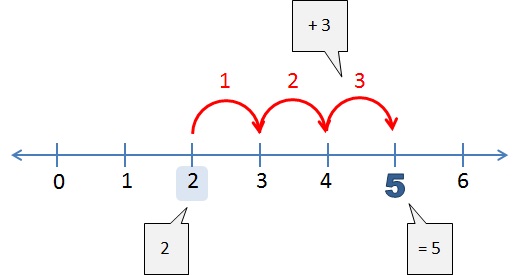 How to Add Long Numbers Together

It is more difficult to add numbers greater than 10 together. For example:

This sum is made easier when we notice numbers are made of hundreds, tens and units (i.e. the place value of the digits in the number). 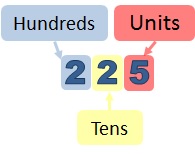 Each part - the hundreds (in blue), the tens (in yellow) and the units (in red) - can then be added to each other:

These 3 parts can then be added to give the answer:

The solution to 225 + 63 is 288. This method of breaking numbers down into hundreds, tens and units is the basis for long addition, which offers a more systematic way of doing addition.

How to Do Long Addition 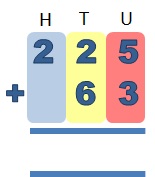 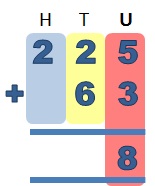 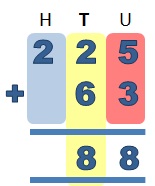 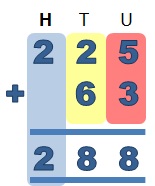 The order in which numbers are added does not matter. For example:

If the 2 and 3 are swapped around, the sum is the same:

This is the commutative property of addition - changing the order does not change the result. Line Up the Columns! When doing long addition, ensure you align the numbers in the correct columns, so the units are all in the units column etc. For example, the following would be incorrect:

When adding numbers in a column, sometimes the sum may be 10 or more:

Adding the units above gives 12. To do long addition correctly,
Help Us To Improve Mathematics Monster
Please tell us using this form