The range of a set of numbers is the difference between the highest number and the lowest number in the set.

The Oxford English Dictionary defines the range as "the difference observed in a sample between the smallest and largest values of a variable." 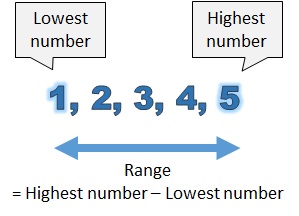 Imagine we wanted to find the range of the numbers given below:

A Formula to Find the Range

The formula for finding the range is shown below:

Why Is the Range Useful?

There are a lot of differences in the things we choose to measure. People have many different heights or ages or incomes or test scores. The range is useful because they can summarize how spread out the data is. Rather than recording the height of every adult in a group, it is useful to know that the difference between the tallest and the shortest height is 1 foot, or 31 cm.

The Range As a Measure of Spread

The Range Is a Bad Measure of Spread

The range is the simplest measure of spread, but not a very good one. It only uses two pieces of information, the largest number and the smallest number. It ignores all other information. Consider the heights of the two groups of people below. The range (and the average - the middle height) is the same in both sets.

A good measure of spread should tell us that the bottom group is more spread out than the top group, but the range tells us that both groups are equally spread out.

The slider below gives more information about the range. Open the slider in a new tab

The Range Is a Distance on a Number Line

The range is the distance between the highest and lowest numbers on the number line.

The Range and Outliers

What is data? What is an average? What is a number line?