The small 2 written beside the 10 means it is raised to an exponent of 2. This means 10 is multiplied by itself 2 times.

Understanding a Power of 10

Why Are Powers of 10 Useful?

Powers of 10 are useful because they allow us to write very large (or very small) numbers in an easy way. If we wanted to write one million in full, we would have to write a lot of numbers down:
1,000,000
Using powers of 10, we can write it much more easily as a power of 10. There are 6 0s after the 1, so the exponent is 6:
106
This is useful for scientists and engineers when they write large quantities down. For example, the speed of light is approximately 300 million metres per second:
300,000,000 m/s
A scientist or engineer would write this using powers of 10:
3 × 108 m/s
There are 8 0s. The 0s come after a 3, so we need to multiply the power of 10 by 3. This way of writing numbers is called scientific notation. Read more about scientific notation

A power of 10 has the same parts as any power. It consists of a base and an exponent. 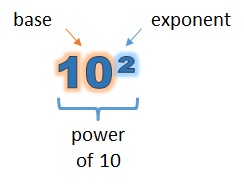 All the examples of powers of 10 we have seen so far have positive exponents.

A power of 10 can also have a negative exponent.

The slider below gives more information about powers of 10. Open the slider in a new tab

A googol is 10100: that is 1 followed by 100 0s. It is a bigger number than the number of particles in the universe (about 1080). The googol gave its name to a famous search engine company. A googleplex is 10 with an exponent of a googol.
Help Us To Improve Mathematics Monster
Please tell us using this form

What is a power? What is a base? What is an exponent? What is scientific notation?