Pi is mathematical constant, denoted by the symbol π. Pi is approximately equal to:

The Oxford English Dictionary defines pi as "a transcendental number which is equal to the ratio of the circumference of a circle to the diameter, having a decimal form beginning 3.14159265…, and commonly approximated to 22⁄7. Usually written π."
.

Pi Is the Ratio of Circumference to Diameter

Pi is the ratio of a circle's circumference to its diameter.

In this formula, C is the circumference and d is the diameter. This ratio is constant for all circles.

Why Is Pi Useful?

Pi is found in trigonometry because the sine, cosine and tangent functions can be defined from a unit circle. Sine and cosine functions can be used to describe signals, like alternating currents and radio waves. This means π is often used when analysing signals, such as finding the power coming from a mains supply.

The Value of Pi

Pi is an irrational number; it cannot be expressed as a ratio of two numbers. Because of this, Pi goes on forever. 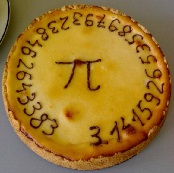