The Oxford English Dictionary defines the mode as "the value, or range of values, of a variable which occurs most frequently in a set of data."

Use this interactive widget to see the mean, median, and mode averages of your data set.

Imagine we wanted to find the mode of the numbers given below:

Imagine several candidates are standing for election. The candidate with the most votes would win the election. The winning candidate would be the mode. Their name would appear most in the ballot box. 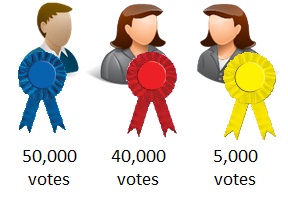 For a set of numbers, there is only one mean and one median (the other types of average). However, there can be different numbers of modes: none, one or more than one.

The Mode Can Be Used for Non-Numeric Items

The other averages (the mean and the median) only apply to numbers. The mode can be used for items that are not numbers (non-numerica or categoric data). In the example used on this page, the politician that wins an election is the one with the most votes. Their name (with a voter's cross next to) appears most in the ballot box.

The Mode is a Bad Measure of Central Tendency

The Mode Can Be Misleading