An ellipse is a flattened circle, often called an oval.

The Definition of an Ellipse

The Oxford English Dictionary defines an ellipse as "a plane closed curve (in popular language a regular oval), which may be defined in various ways:
Let us look at these definitions of an ellipse:

(a) An Ellipse As a Conic Section

An ellipse is found by slicing through a cone at an angle to the base so that it cuts completely through the curved surface of the cone: 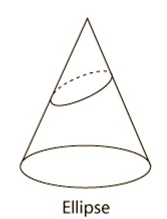 An ellipse has two points inside it, each called a focus. Together they are called foci. If you drawn lines from the foci to any point on the ellipse, the sum of the lengths of the line is always the same. 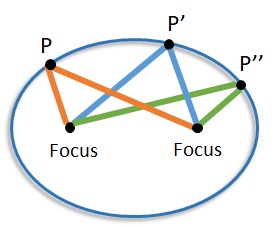 An ellipse has a line called a directrix on either side. 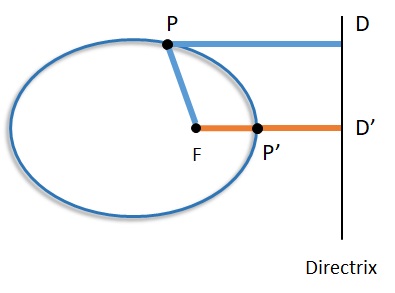 Draw a horizontal line from the directrix to a point on the ellipse (DP), and then a line from the point to the focus (PF). The length PF is shorter than DP.
PF < DP
And if you divide PF by DP, you get a ratio called the eccentricity (e) which is less than 1. This ratio is the same for all lines joining the focus to a point, and then joining the point horizontally to the directrix. The eccentricity is the same for all points on the ellipse. If we divide the length P'F by the length D'P', we get the same ratio
Eccentricity, e = PF⁄DP = P'F⁄D'P'

Parts of an Ellipse

The eccentricity e of an ellipse gives a measure of how much the ellipse has been flattened from a circle. The eccentricity must be greater than 0 and less than 1. One definition of an ellipse is the ratio of the lines joining the focus to a point to the horizontal line from the point to the directrix. Another definition is the distance between the two foci divided by the length of the semi-major axis. 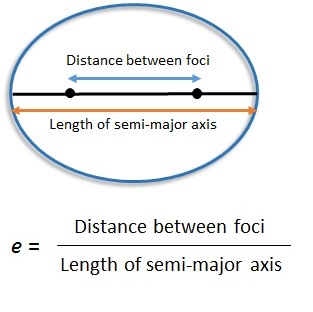 Area of an Ellipse

The area of an ellipse is found using the formula:

In the formula, a is the semi-major axis and b is the semi-minor axis.
Read more about how to find the area of an ellipse

Equation of an Ellipse

The equation of an ellipse centred on the origin is: 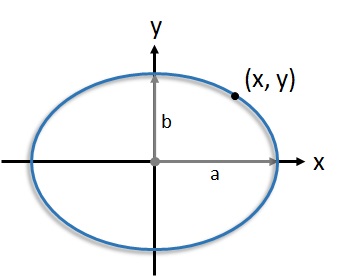 Here is an interactive widget to help you learn about ellipses.

Anything shaped as an ellipse can be described as elliptical.

The ellipse has the special property that when the lengths of the lines from the foci to a point on the ellipse are added, that length stays the same. This gives a simple way to draw an ellipse. Push two pins into a sheet of paper and place a loop of string around them. With a pencil, pull the string taut. Keeping the string taut, draw around. 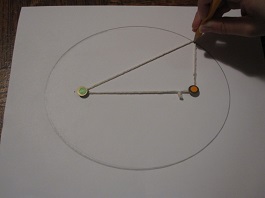 Because the string length stays the same, the total distance from the pencil to the two foci remains constant. You will draw an ellipse. This will not be a proper ellipse, as the string will stretch a little. But it will be good enough for some purposes. If a gardener wishes to make an elliptical flower bed, they will mark out an ellipse using two stakes in the ground and rope. This is called a Gardeners Ellipse.

The Whispering Gallery at St. Paul's

There is an elliptical room under the dome of St. Paul's Cathedral in London, known as the Whispering Gallery. 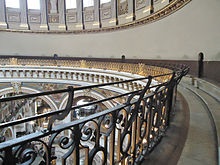 If you stand in the focus of this ellipse and whisper, the sound gets reflected off the walls to the other focus of the ellipse. Also, if you whisper near the wall, the sound will travel around the walls and can be heard at any other point on the wall. The sound has become known as whispering-gallery waves as the effect was first discovered at the St. Paul's Whispering Gallery.
Help Us To Improve Mathematics Monster
Please tell us using this form

What is a circle? Finding the area of an ellipse Learn about ellipses (