Isaac Newton was a mathematician and physicist, widely regarded as the greatest scientific intellect of all time. Newton's masterwork was his book, Mathematical Principles of Natural Philosophy, in which he laid down his Laws of Motion. He explained mathematically how objects move (whether an apple falling from a tree under gravity or planets moving around the Sun in a solar system). In Newton's book Opticks, he made major advances in optics, the study of the properties and behavior of light. His main mathematical achievement was developing calculus. He was an Member of Parliament and Master of the Royal Mint, responsible for England's coins. 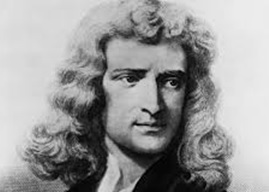 Isaac Newton was born in 1642 in England. In 1661, he entered Cambridge University. He was elected a Fellow of Trinity College in 1667, then Lucasian Professor of Mathematics in 1669. In 1671, he was elected a Fellow of the prestigious Royal Society in London. He became the President of the Society in 1703, and was re-elected every year until his death. In 1689, he was elected as the Member of Parliament for the University of Cambridge. He became the Master of the Mint in 1999, responsible for England's coins; a post he held to the end of his life. Isaac Newton died in 1727, and was burined in Wesminster Abbey.

Calculus is a very important branch of mathematics.

The slider below gives a brief summary of Newton's work on calculus and why it is useful. Open the slider in a new tab

Isaac Newton and the Apple

One of the ost famous stories in science is when Isaac Newton watched an apple fall from a tree in his mother's garden - which inspired his theory of gravity. 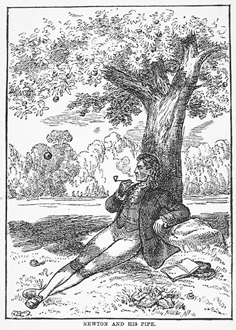 Newton realised that just as gravity pulled the apple to the ground, the same force kept the Moon in orbit around the Earth, and the Earth around the Sun. In fact, the movement of all the planets could be worked out using Newton's law.

Newton laid down 3 laws of motion:

Who was Rene Descartes?